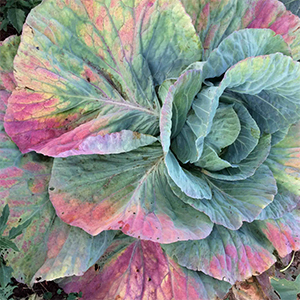 Since 2012, Brassica farmers across diverse regions of SA have observed a new disease called ‘Brassica stunting disease’. The disease affects various Brassica species, but cabbages (Brassica oleracea var capitata) appear the most affected. The disease is characterized by stunted plants, flattening and sometimes purpling of the leaves, side shoot development, vascular discoloration in the stem and/or midrib of leaves, poor root development, low yield and low quality of the final product, thereby reducing the market value (Fig 1). The impact of BSD on cabbage production can be severe. If plants are infected at an early stage, their growth will be severely stunted and no head will be formed. If they are infected at a later stage, the size of the head produced will be greatly reduced and a black ring, due to vascular discoloration, will be clearly visible in the stem.

In order to identify the causal agent(s) of the disease, a research project was initiated at the University of Johannesburg in 2013. During infection trials carried out between 2014 – 2016, it was determined that BSD is not seed, soil or water- borne and is caused by a pathogen that is transmitted by a flying insect. In 2015, It was shown that a virus, called Turnip yellows virus (TuYV), transmitted by the green-peach aphid (GPA) (Myzus persicae) (Fig. 2), is associated with the Brassica stunting disorder. Furthermore, using a molecular detection technique (RT-PCR), TuYV was detected in all symptomatic cabbage plants collected from the Limpopo, Gauteng, North West, Kwazulu Natal, Eastern Cape and Mpumalanga Provinces between 2013-2016.

The identification of TuYV in association with BSD in SA has been surprising as this is by no means an unknown virus in terms of Brassica crops. Turnip yellows virus, a single stranded RNA virus of the genus Polerovirus, family Luteoviridae.a wide range of aphid species, but M. persicae, the peach-potato or green-peach aphid, is regarded as the main vector very common in oilseed rape crops, formerly known as Beet western yellows virus (BWYV), is weed species. The virus is but also readily infects brassicas, including broccoli,cabbage, cauliflower,

It is spread by Brussels sprouts, turnips, swede, kale. It also infects lettuce, beans and many. TuYV has been found widespread in Europe, the UK and recently in Australia, in areas of intensive brassica production, where in some years, all plants in commercial crops are infected. However, unlike with BSD in SA, in the UK and Europe TuYV infection often goes unnoticed as the virus rarely causes clear symptoms. The virus does however dramatically reduce yields, especially when plants are infected early in the growing season.

In an attempt to determine the host range of BSD, eight Brassica species were evaluated in an infection trial in 2015 and 2016. Five species, including broccoli (Brassica oleracea L. var. botrytis L.), cauliflower (Brassica oleracea L. var botrytis), kale (Brassica napus) and canola (Brassica napus) showed typical BSD symptoms, but chinese cabbage (Brassica rapa), mustard (Brassica rapa L.) or oilseed radish (Raphanus sativus) did not. TuYV was also detected in all the symptomatic cabbages and other hosts screened in the trail using RT-PCR, but absent from all the uninfected plants.

During insect transmission experiments carried out in 2015, it was clearly shown that TuYV are effectively transmitted by M. persicae. Cabbage seedlings caged with aphids collected from the above mentioned field trial in 2015, developed typical BSD symptoms about 45 days later, whereas no symptoms were seen on the control cabbage plants. The presence of TuYV in the diseased cabbage as well as inside the caged aphids, was also confirmed using RT-PCR. GPA occurs widespread across the world and extremely polyphagous, feeding on over an estimated 40 different plant families including multiple arable crops. In addition to GPA, more than 30 other aphid species are known to occur in SA. In recent surveys to determine the most predominant aphid species present in two brassica production regions (Brits and Groblersdal; 2016 and 2017), aphid populations alighting in cabbage fields were monitored over a 14-week period using yellow bucket traps. A total of 30 different aphid species were collected, 26 different aphid species in Brits, and an additional 4 aphid species unique to Groblersdal. Although the same aphid species were collected in 2016 and 2017, there were significant differences in the total number of

aphids trapped and in the representative number of aphids from each species. In 2016, a total of 4476 aphids were trapped and in 2017, only 2834 aphids were collected. Of particular interest was the significantly lower number of M. persicae (the aphid species considered as the most important vector of TuYV) that was collected in 2017. In 2016, a total of 2639 M. persicae insects were collected, corresponding to 58% of the total amount of aphid samples collected, whereas in 2017 only 288 M. persicae insects were collected, accounting to only 10% of the total aphid samples collected. Most interestingly, disease incidences between the two years also differed significantly, i.e. 95% infection incidence in cabbages in 2016 vs 54% in 2017 and this variation in disease incidence seems to correlate with the lower number of M. persicae insects present in the cabbage field in the 2017 season. The presence of TuYV-in the collected aphids were also monitored using RT-PCR and a total of 14 aphid species, including M. persicae, Aphis spp., Acythosiphon kondoi and Rhopalosiphum maidis as the most predominant species, were positive for carrying TuYV and can be considered potential vectors.

Attempts at controlling TuYV infection in Europe and Australia, especially on Brassica napus (canola), include control of broadleaf weeds that act as virus reservoirs, manipulation of sowing dates to avoid exposure at the seedling stage to peak aphid flights, the use of more resistant varieties and the use of a imidacloprid seed dressing to provide early control of the aphid vector during the vulnerable seedling growth stage. Effective control measures of BSD on brassicas in SA are also currently being investigated. An infection trials, evaluating chemical control of the aphid vector, were carried out in 2017 on cabbages in Brits. The trial e

valuated a thiamethoxam seed treatment thiamethoxam and imidacloprid seedling drenches and(20 000 plants) and was based on natural, field infection in Brits.

Please report occurrences of this disease to: If you have seen any of these plants infected with virus-like symptoms or require further information, contact Dr. Lindy Esterhuizen, UJ, via phone 011-559-3352 or email Lesterhuizen@uj.ac.za.

We use cookies on our website to give you the most relevant experience by remembering your preferences and repeat visits. By clicking “Accept All”, you consent to the use of ALL the cookies.
Accept All
Manage consent

This website uses cookies to improve your experience while you navigate through the website. Out of these, the cookies that are categorized as necessary are stored on your browser as they are essential for the working of basic functionalities of the website. We also use third-party cookies that help us analyze and understand how you use this website. These cookies will be stored in your browser only with your consent. You also have the option to opt-out of these cookies. But opting out of some of these cookies may affect your browsing experience.
Necessary Always Enabled
Necessary cookies are absolutely essential for the website to function properly. These cookies ensure basic functionalities and security features of the website, anonymously.
Functional
Functional cookies help to perform certain functionalities like sharing the content of the website on social media platforms, collect feedbacks, and other third-party features.
Performance
Performance cookies are used to understand and analyze the key performance indexes of the website which helps in delivering a better user experience for the visitors.
Analytics
Analytical cookies are used to understand how visitors interact with the website. These cookies help provide information on metrics the number of visitors, bounce rate, traffic source, etc.
Advertisement
Advertisement cookies are used to provide visitors with relevant ads and marketing campaigns. These cookies track visitors across websites and collect information to provide customized ads.
Others
Other uncategorized cookies are those that are being analyzed and have not been classified into a category as yet.
SAVE & ACCEPT